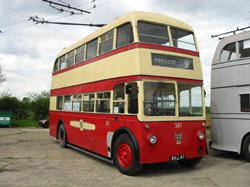 The St Helens trolleybus system opened on 11 July 1927, gradually replacing the town's tramway network. It had six routes and a maximum fleet of 66 trolleybuses. The route to Atherton was jointly operated with the South Lancashire Transport Company, one of only four such arrangements in the UK.

Until 1950 all St Helens trolleybuses were of  lowbridge layout with sunken side gangways in the upper saloon due to the number of low bridges on the routes. By that year only one low bridge remained and the new General Manager, R Edgeley Cox, wanted to introduce highbridge-type trolleybuses. To prevent bridge strikes an innovative and unique feature was introduced: the negative trolley wire (ie nearside) on the approach to the offending low bridge was carried over the pavement and at a lower height than normal. This caused the negative trolleyboom to be forced low down and to the side, which activated a switch mounted on the roofs of the new highbridge buses thus cutting the power to the motor.

This vehicle was delivered in 1950 as no. 187 and subsequently being remumbered to 387. Its life in St Helens was short: another change of General Manager initiated a new policy and the system closed on 30 June 1958. Of the sixteen newest trolleybuses, the eight Sunbeams were sold to South Shields Corporation, serving that town until 1963, whilst Bradford City Transport bought the 8 BUTs including 387.

Bradford soon found their new acquisitions weren't in the best of condition and introduction into service there was delayed whilst they were thoroughly overhauled mechanically (by BCT) then sent to CH Roe of Leeds for the bodywork to be refurbished; the seating was also increased from the original H30/26R to H35/28R layout as part of this work. 387 became Bradford 799 and re-entered service on 2 May 1959. Apart from being fitted with automatic acceleration control its life in Bradford appears to have been uneventful and it was one of two of the batch (the other was 795, originally St Helens 183/383) to survive until 1971.

It is now the only remaining St Helens trolleybus and is being restored as 387. It is currently on loan to the North West Museum of Road Transport in its home town for static display whilst restoration work continues.