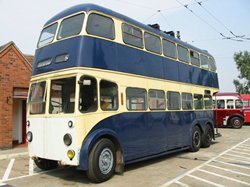 37 started life as fleet number 17 and is a Daimler CTE6 with English Electric components. However, by the time it entered service in 1950 single deck operation was starting to become uneconomic and after the abandonment of some routes by 1954 only one section (Mexborough) dictated the use of single deck vehicles. It was therefore decided to rebody 20 of the postwar Daimlers as double-deckers and 17's chassis was the first of 14 sent to CH Roe of Leeds in 1956 for new 70-seat bodies. The "new" bus was renumbered 37, re-entering service on 7 May 1956.

It remained in service until the closure of the system in 1965, as did sister vehicle 44.

The vehicle needs some remedial work before it can re-enter service at the Museum.

37 is owned and maintained by the  Rotherham 37 Trolleybus Group.