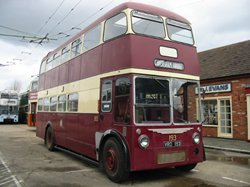 A batch of 12 forward entrance Sunbeam F4A trolleybuses was ordered by Reading Corporation to replace its 14 remaining AECs of 1939 vintage (one of these was 113, qv). These arrived in 1961 and bodywork by HV Burlingham of Blackpool. Burlingham was a long-established coachbuilder more associated with coach bodywork, but unlike most of its competitors in the market it built smaller numbers of bus bodies in the Summer months; coach bodies tended to be built over winter, ready for the new season at Easter. Burlingham had been bought by the Duple coachbuilding company in 1960 and the new owners decided to concentrate on the coach market.

As the last in the batch, 193 not only carries the last Burlingham bus body to be built, it was also the last F4A built by Sunbeam and as it turned out, also Reading's last trolleybus purchase. Six of the new arrivals were fitted with brand new electrical equipment but the others, including 193, received refurbished motors from the AECs they displaced.

193 was purchased for preservation after a service life of only 7 years as the final closure of the Reading system took place on 3 November 1968. It became the first trolleybus to arrive at the newly-acquired Sandtoft site in November 1969. After periods in storage much restoration work has been been done recently and although not yet fully complete 193 operates occasionally at the Museum.