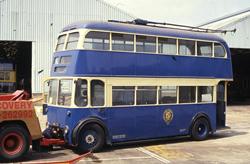 The Nottinghamshire & Derbyshire Traction Company Ltd (commonly known as Notts & Derby) was a member of the Balfour Beatty Group. As well as owning its own electricity generating station it operated an interurban tramway system which it started to replace with trolleybuses on 7 January 1932. When the electricity industry was nationalised in 1948 Balfour Beatty sold out to the British Transport Commission. The BTC was also in Government ownership and although its subsidiaries ran thousands of motorbuses its only other trolleybus interests were the 11 vehicle Brighton, Hove & District fleet.

In the mid 1950s 770's seating capacity was increased by two, making it H32/26R, and it was fitted with automatic acceleration control. Withdrawal took place in October 1963 and the bus was placed in store until it was sold for preservation in June 1967.

353 was kept in under-cover accommodation near Bournemouth where much restoration was undertaken, although not completed. Subsequently being acquired by and moved to the Trolleybus Museum, when funds and manpower become available this work will be finished.

The vehicle is available to view at the Museum if accompanied by a member of Staff.