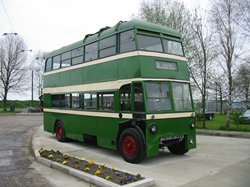 The Nottingham trolleybus system opened on 10 April 1927, gradually replacing the city's tramway network. It was a medium-sized system, with a total of 8 routes and a maximum fleet of 157 trolleybuses. It closed on 30 June 1966.

Six Nottingham trolleybuses are preserved: four at the Trolleybus Museum at Sandtoft, and the other two in a private collection.

Although built in 1945, 466 is to the Ministry of War Transport "relaxed utility" specification. This was a very basic design intended to minimise the use of labour and materials, for example by eliminating curved panels where possible and single skin construction, in which the passenger can see the reverse side of the external panelling. The chassis is an example of the Karrier W4, which was the only type of trolleybus available from 1942 until 1946 and the bodywork by Brush of Loughborough.

Withdrawn from service in 1962, 466 arrived at Sandtoft in 1973 in poor condition. Eventually transferred to the Museum's ownership it has received much attention and is making good progress. However, completion is still some way off.

The vehicle can be viewed at the Museum if accompanied by a member of the Museum Staff.