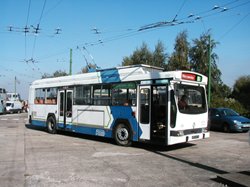 202 was the first of 49 similar vehicles delivered to Marseilles, France's second largest trolleybus system in 1979 and ran until the system closed in 2004. The ER100 was designed by Berliet who soon after were taken over by Renault; the Marseilles batch were amongst the first to be badged as Renaults. Between them, Berliet and Renault supplied more than 300 of the model to various French trolleybus operators.

Based on the PR100 motorbus (see also our PR100 in London Regional Transport livery), the ER100 incorporates an auxillary diesel engine for operating away from the overhead and thyristor (electronic) control. As with our other more modern exhibits, the pedals are in the normal positions with the accelerator on the right of the brake pedal.

202 has proved a difficult vehicle to keep running. In particular, its electronic systems do not seem to like the Lincolnshire dampness! The vehicle ran at the Museum for several years, demonstrating its off wire capability as well as its very rapid but smooth acceleration under 600v dc. Sadly the electronic systems have started to fail and now it requires considerable specialist rectification. If finance and expertise became available, it would be great to see this bi-mode trolleybus running again.

The vehicle is on static display at the Museum.