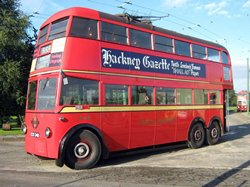 The trolleybuses for London were designed and built specifically to be worthy tram replacements. Like the trams, they were large high-capacity double deckers, with rapid acceleration. All but one had three axles (necessary for licensing at the time as they were 30 feet long), and were much quieter in operation than contemporary trams or diesel buses. Trolleybuses were built on AEC, Leyland and British United Traction chassis.

Apart from the Diddlers and a few experimental vehicles, most London trolleybuses were near-identical. There was an exception: in 1941 and 1943 London Transport acquired 43 trolleybuses that had been ordered for South Africa but could not be shipped there because of the war. These vehicles were allocated to Ilford depot. They formed three different classes and needed special dispensation because they were eight feet wide, six inches more than the law allowed.

Some later pre-war vehicles made use of modern monocoque construction techniques to produce chassisless bodies, where the mechanical and electrical parts, including the traction motors, are affixed to the bodywork and not to a separate chassis.

One experimental vehicle was proposed to be the forerunner of a fleet that would use the Kingsway tramway subway, but the change of policy after the war meant that this was never carried out.

1348 was a member of the London Transport K2 class - Leyland chassis, Metropolitan Vickers motor and English Electric control equipment. It entered service in June 1939 on the north London routes from Lea Bridge depot. Withdrawn in July 1961 it was stored for some time, until acquired by the Transport Museum Society of Ireland. Unfortunately due to a shortage of undercover accommodation it was kept outside for many years. Placed on long-term loan to the Trolleybus Museum in 2010, 1348 has been restored to 1939 condition.

This vehicle runs regularly at the Museum.