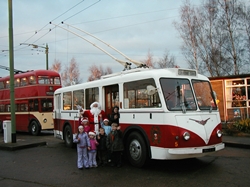 Trolleybuses made their first appearance in Limoges during the German occupation of the city. The French were not allowed to celebrate Bastille Day on 14th July during the Occupation. By a strange coincidence the opening of the Limoges trolleybus system was arranged for 14th July 1943 and apparently celebrated ecstatically by the local population! The trolleybuses were used to replace some of the town's tramway, which was old and in poor condition.

The initial fleet comprised 8 vehicles, including no 5; it was built in the operator's (CTEL, later known as CTL) workshops to Vetra design, which organisation had been evacuated from Paris to Limoges. CTEL went on to build more trolleybuses of this type for its own fleet. They were the last of their type in French service in 1988, although modernised and converted to one-man-operation in mid-life.

No. 5 arrived at Sandtoft in March 1989. It is affectionately known at the museum as 'Vera' as at first glance the maker's name on the front cowling is easily mis-read!

Driving 'Vera' can best be described as interesting and not for the faint-hearted. She has two power pedals, one in the usual trolleybus position on the left and a second to the right of the brake pedal. The righthand pedal is only used at higher speeds. Both power pedals work the opposite way round to normal, ie the pedal is pressed right to the floor to start the bus and the more it is released the faster the bus goes! The driver also has to remember to tap the brake pedal to break the current at "dead" sections in the overhead wires.

'Vera' is only used infrequently but can be viewed at the Museum if accompanied by a member of the Museum's staff.