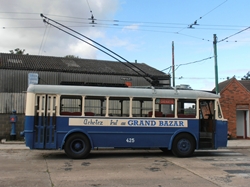 Liege was the second of Belgium's five trolleybus systems to open, on 1st August 1930. The first vehicles were supplied by Ransomes, Simms & Jeffries of Ipswich. The next batch of 30, numbered 407 to 436, was built in Belgium in 1932/1933 but substantially to the RS&J design, including the Estler trolley bases with the trolleybooms mounted on top of each other, rather than side-by-side. This arrangement had fallen out of favour by the late 1920's as it limited manoeuvrability.

The chassis and bodies were built by Fabrique Nationale d'Arms de Guerre (FN) with electrical equipment by Constructions Electrique de Belgique and featured accommodation for a seated conductor in the middle of the Belgian nearside. The electric contactors are mechanically operated directly by the power pedal which makes operation heavy and "clunky"; the footbrake is mechanical with no power assistance.

At the outbreak of World War 2 the Liege fleet numbered 100 vehicles. After the war, by 1957 50 new trolleybuses had entered service; however the system closed in 1971. Some of the FN batch survived in service until 1965.

425 was preserved in Bradford from 1966. In 1967, it became the only preserved overseas trolleybus to be photographed under the wires of an extant British trolleybus system. It came to Sandtoft in 1973.

425 is in need of some work before it can return to service, although it is generally in good condition. It can be viewed at the Museum if accompanied by a member of staff.