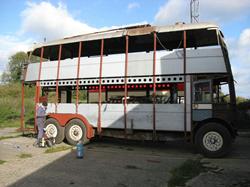 The system eventually partially replaced the tramway network, the latter lasting for several more decades until its closure on 2 August 1961. However, the trolleybus system itself closed on 10 January 1986 (Wikipedia).

The 18 trolleybuses ordered by Johannesburg just before the Second World War were built but could not be shipped due to wartime conditions. These, and 25 for Durban, were diverted to London Transport who had an increased traffic requirement but had lost vehicles because of enemy action. Their delivery to London was described in Commercial Motor Magazine on 14th November 1941:

Due to the abnormal circumstances of the day the opportunity is being taken by London Transport to operate trolleybuses originally intended for South Africa - 25 for Durban and 18 for Johannesburg. The chief feature of interest is that the African vehicles are 6 ins, wider than the maximum width of 7 ft 6 in. permitted in this country. This enabled the width of the gangway and seats to be increased slightly, with a consequent improvement in comfort, and with more room for the conductor to pass along the gangway. The extra width, of course, entails an increase in weight to 9 tons 19 cwt. 3 qrs. empty, or approximately 14+ tons with 72 seated passengers. This is 1 ton more than normally allowed here. Another feature in which the African trolleybuses differ is as a result of the warmer conditions. Drop windows are fitted throughout, and the upper halves are provided with Purdah glass, thus providing plenty of ventilation and reducing glare from the sun.

In other aspects the Vehicles generally conform with practice in this country. The driver's cab occupies the full width of the vehicle.

The chassis is the rigid six-wheeled type with an 18-ft. 7-in. wheel-base and is provided with standard-type compressed-air brakes.

Apart from blackout requirements such as headlamp masks, white edging paint etc these buses were built to full peacetime standards. Because of their additional width all the diverted South African buses were allocated to Ilford Depot away from the Central Area. London Transport assigned them class codes of SA1, SA2 and SA3 depending on the various chassis, electrical equipment and body types.

The successful operation of these and diverted 8-foot wide buses in other towns led to the Construction & Use Regulations being amended to permit 8 foot wide buses in 1946, although initially the routes on which they were to be used had to be individually authorised. This restriction was itself quickly relaxed in the provinces but in London the Metropolitan Police continued their resistance to the use of wider buses for some years afterwards. As a result the postwar London Transport Q1 class was also allocated to "suburban" depots well away from the Central Area. Despite being non-standard the SA classes lasted in London service until the late 1950's when Ilford Depot was converted to motorbus operation.

In 1948 BUT supplied replacement vehicles to Johannesburg with bodies by the MCCW organisation as part of a bigger batch of 45. These buses, of which 589 was one, were therefore virtually identical to the London Transport SA3 class. 589 was used on "Non-European" services during the infamous Apartheid era, being withdrawn in 1974. Stored in the Durban area until 2008, 589 was bought for continued preservation in the UK where it arrived in 2009.

During its period in storage 589 had deteriorated badly and is currently receiving extensive restoration in the South of England. This is now at an advanced stage but it has been, and continues to be, a costly project. Donations towards 589's restoration will be most gratefully received. Subject to funding it is hoped that 589 will finally arrive at the Museum before too long. The current plan is that it will be painted in London Transport wartime livery initially, before eventually taking on a Johannesburg hue.