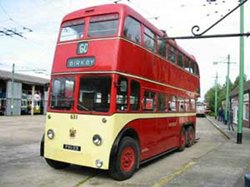 631 was the first of a batch of 10 Sunbeam S7A trolleybuses which entered service in Huddersfield in November/December 1959 to replace some of the ageing rebuilt Karrier E6 trolleybuses. They were Huddersfield’s last new trolleybuses and also the last three-axle trolleybuses built for service in the United Kingdom and followed the style of the previous Huddersfield trolleybuses in retaining several features of early 1930's practice. Platforms had two steps from the road; the rear platform windows were two-piece; and they were 3-axle and 7ft 6in wide, even though 2-axle buses of this length had been made legal in 1956 whilst the maximum width of 8ft had been permissible since 1946.

631 was not particularly well-liked by the Huddersfield drivers, who considered it sluggish. Even minor defects would often result in a request for a replacement bus to be provided during the day and it's been alleged to have a suffered a high frequency of flat tyres than its compatriots! As a result it clocked up a lower mileage than the other buses in the batch, making it an ideal candidate for preservation. Otherwise 631 led an uneventful life during its 9 years in service.

When the trolleybus system in Huddersfield was finally abandoned in July 1968 the Huddersfield Trolleybus Preservation Society (HTPS) secured 631 for preservation. It was used for two very successful enthusiast tours of other systems, touring the Reading system on 27 October 1968, one week before that system closed and with Belfast 168 touring on the same day, then running another tour in Bournemouth on 24 November 1968.

The HTPS became part of the West Yorkshire Transport Circle, which was one of the four founding societies of the Trolleybus Museum. 631 was transferred to Sandtoft in 1969 soon after the first depot was built. WYTC then became part of the British Trolleybus Society and 631 was transferred to BTS ownership. Arguably 631 has been Sandtoft's most reliable service trolleybus over the years and is still in good condition.

In 2012 631 was decorated in true Huddersfield style to mark the Queen’s Diamond Jubilee. On 10 January 2013, she was towed to Swindon to be repainted back into Huddersfield livery and a partial internal repaint was carried out. The seating was re-upholstered too. On 3 May 2014 631 was returned to Sandtoft and re-entered service.

631 runs regularly at the Museum.