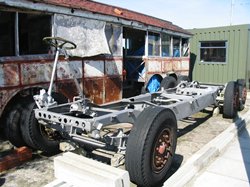 The Huddersfield trolleybus system opened on 4 December 1933, gradually replacing the town's tramway network which closed on Saturday, 29 June 1940. It was a medium-sized system, with a total of 15 routes and a maximum fleet of 140 trolleybuses. It was closed on 13 July 1968.

A notable feature of the system was the Longwood trolleybus turntable, which was one of only four such turntables ever to have been constructed in the UK. The turntable was manually-operated and was in use only in 1939–1940 until wartime conditions forced the introduction of other arrangements. However, it remained in situ until demolished in the 1980s.

Originally numbered 70, this was one of 65 similar trolleybuses. After withdrawal in 1953 it was one of five members of the batch to be sold to Epsom & Ewell Urban District Council for use as mobile toilets on Derby Days at Epsom Racecourse. It originally came to Sandtoft as a complete vehicle in 1970 but then returned to Yorkshire for storage. The poor condition of the body led to a decision to retain only the chassis, which is a rare “spectacle frame” type where the side frames completely encircle the rear axles. 470's chassis is easily visible at the Museum, next to the admissions building.