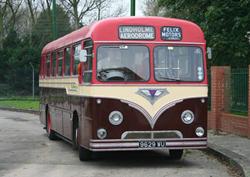 At one time the Doncaster area was a bus enthusiast's Mecca with several small independent operators based around the town. Amongst these was Felix Motors of Hatfield, one of those which also operated coaches. 41 was new in 1960 as a 43 seat bus but is mechanically similar to 40 (qv), having a 5-speed synchromesh gearbox and vacuum brakes. Early in its life 41 was given 41 high-backed seats making it a dual purpose vehicle - ie, it could be used on coaching duties at times of peak demand as well as a service bus.

Felix Motors was sold to South Yorkshire PTE in 1976 and 41 was repainted into the PTE livery of brown and cream and renumbered 1012. It was initially allocated to the former Doncaster Corporation depot but being non-standard with the ex-Corporation fleet of Leylands and Daimlers spent most of its time on staff duties with only occasional forays into passenger service.

The PTE had a policy of buying out the independent operators in its area - Felix Motors was the first - so when it acquired the Booth & Fisher company at Halfway (south of Sheffield), which also operated AEC Reliances, 1012 was transferred there. It was withdrawn from service in 1979 and acquired by the Felix Preservation Group.

After an extensive renovation, including repainting into one of the several versions of Felix livery it carried in its service life, 41 was frequently used on the Museum's free bus services. It is not currently fully roadworthy but can be viewed at the Museum.