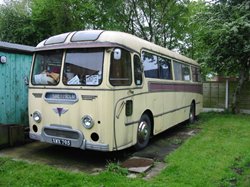 At one time the Doncaster area was a bus enthusiast's Mecca as several small independent operators were based around the town. Amongst these was Felix Motors of Hatfield, one of those which also operated coaches. 40 was new in 1959 and carries a comparatively rare Roe Dalesman body. It has a 5-speed synchromesh gearbox and vacuum brakes.

Upon withdrawal 40 was sold to a local farmer who converted into a motorhome, subsequently passing to a local GP who also used it for holidays. In 1990 it was acquired jointly by the Felix Preservation Group and the Sheffield Transport Group who used it as static accommodation at the Museum until 2019; it is now being restored to original condition away from the Museum site.

At some point in its motorhome days 40 had been re-registered DSU 457, but now has its original identity again.