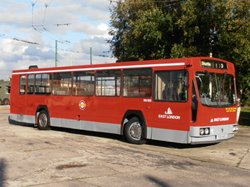 This bus was built as a demonstrator and exhibited on the bodybuilder's stand at the 1988 Commercial Motor Show. Northern Counties was looking for ways to diversify in the aftermath of the collapse of British Leyland as other traditional bus bodybuilders such as Metro-Cammell-Weymann were developing complete vehicles. Similarly, Renault were trying to break into the British market.

The PR100 is the diesel version of the ER100 trolleybus, of which the Museum also has an example: Marseilles 202. F100 AKB's body incorporates the distinctive Renault front and rear ends which Northern Counties completed. After its unveiling at the Commercial Motor Show the bus was evaluated by several operators but no orders were forthcoming and in 1990 this unique bus was sold to Hornsbys of Ashby, who re-registered it WUK 155.

Withdrawn in 2007 it was immediately purchased for preservation and has been repainted in East London Buses livery. Currently awaiting mechanical repairs it is on view at the Museum.