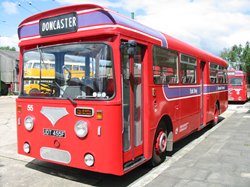 The Royal Tiger Cub was designed as an export model, filling a gap for medium-weight and length chassis in Leyland's overseas markets. Basically running units from the heavyweight Leyland Leopard model were incorporated in an extended Tiger Cub chassis. As intended, most were exported and only 20 were built for the home market - 10 in 1965 and 10 in 1968, all for Doncaster Corporation. 55 is the last of the 1968 batch.

Doncaster chose the Royal Tiger Cub model because of its length: at 33ft it permitted dual-doorway bodywork with a reasonably high seating capacity of 45 whereas the Leopard was only available in 30ft and 36ft variants. 55 has a 4-speed semi-automatic pneumocylic gearbox,  and was bodied by CH Roe of Leeds. It was delivered in June 1968 but stored until 1 January 1969; along with the Doncaster undertaking it passed to South Yorkshire Passenger Transport Executive on 1 April 1974, being renumbered 1055.

In a working life of only 11 years 55 carried four different liveries. When delivered this was red with white window surrounds and white band, but the white was overpainted red before it entered service. In 1972 it was repainted into the livery introduced by Doncaster's General Manager RR Davies which incorporated a purple upswept band edged in white. In PTE ownership it received the Executive's initial light brown and cream livery; on a subsequent repaint a darker brown was used.

After withdrawal in 1980 55 was purchased for preservation and is restored in its later Doncaster Corporation livery. It is regularly used at the Museum for shuttle bus and on Isle of Axholme Tour duties.