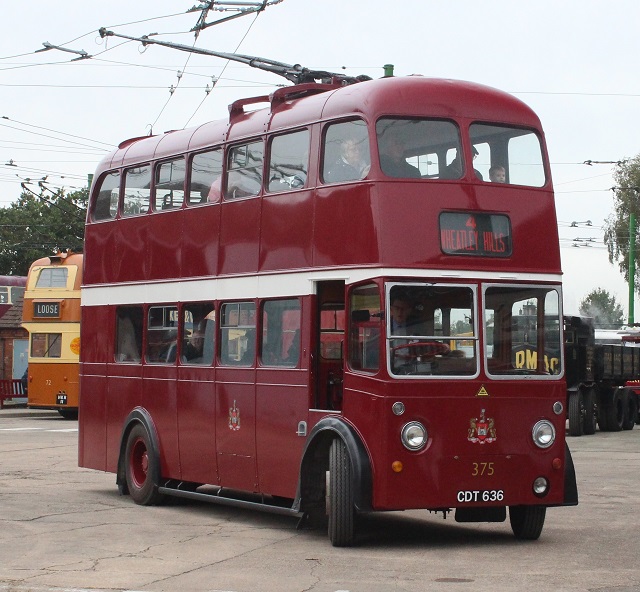 Number 375 was delivered as number 75 in July 1945, with a Park Royal H30/26R body to relaxed utility specification painted in a chocolate livery. It was rebodied in March 1955 with its present Roe body and was renumbered to 375 around the same time. The original Park Royal body was sold to a scrap dealer near Toll Bar in Doncaster and used for many years as a storage shed. It was later scrapped.

Number 375 was chosen to be Doncaster's last trolleybus, a duty it performed on 14 December 1963. Leading up to that final day number 375 had been used on various tours of the system and was maintained in polished condition by DO&LRS members until withdrawal. At that time, Doncaster's then Town Clerk would not allow it to be kept in Doncaster so between 1964 and 1970 it was kept in Stainforth, at the depot of Premier Motors (Harold Wilson Ltd.). From here, DO&LRS members kept deterioration at bay. Number 375 had been placed on permanent loan to DO&LRS by Doncaster Transport Department at the time and finally passed to outright ownership by DO&LRS in 2005. In 1970 number 375 was moved to the newly founded Trolleybus Museum at Sandtoft where it still resides today. Upon arrival at The Museum, it was repainted into its 1955 livery. In the early days at The Museum number 375 was one of the regular trolleybuses in service at open days and events. However, time took its toll and number 375 spent a number of years being restored.

In 2018 it was re-launched into service at the Museum and is now regularly scheduled for duty. It is one of the most popular trolleybuses in the collection.