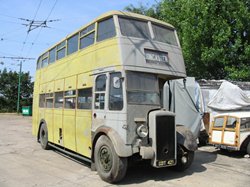 Doncaster Corporation Transport needed a small number of lowbridge double-deckers for the Edlington route, which was plagued with low railway bridges. When numbers 111 and 112 were delivered the Daimler CVD6, with CD6 8.6 litre engine and pre-selective (spring operated gear change) transmission, was Doncaster's standard and the two low-bridge Daimlers were part of the first large batch of buses delivered in the crimson lake livery, with ivory bands and vermillion lining. The lowbridge layout was achieved by using a sunken side gangway in the upper saloon and bench seats for 3 and 4 passengers. Universally detested by conductors and passengers, lowbridge double deckers of this style were a necessary evil and so they rarely strayed from the Edlington route.

By 1957 normal height double deckers could be used on the Edlington route and the vehicle was sold to local independent Rossie Motors in August of that year. Withdrawn by Rossie in 1971 it passed straight into preservation by a private owner. It was stored in Haxey until December 1985 when it moved to The Trolleybus Museum at Sandtoft. In January 1987 number 112 passed into the ownership of DOLRS.

Restoration has never been completed so as a result, number 112 remains in store despite mechanically running quite well. Occasional work is carried out on 112, and indeed the interior has been somewhat improved since its move to the Museum.

This vehicle is kept at one of the Museum's off-site storage facilities.