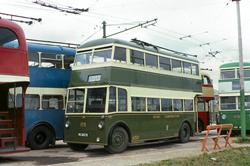 Following a decision by Derby Council that trolleybuses should replace the town’s trams, the system opened on 9 January 1932 and it gradually replaced the Derby tramway network, with the last Derby tram eventually being withdrawn from regular routes at the end of June 1934, with a special last journey on 2 July 1934.

The Derby system was a medium-sized one, with a total of 11 routes, and a maximum fleet of 73 trolleybuses. The system was much cheaper to run than motorbuses but the end was signalled when proposed extensions to the network were blocked by objections to the additional poles and cabling that would be required. The system was closed on 9 September 1967.

During the Second World War the Government developed the "Utility" standard for essential consumer goods, such as clothing and furniture. Utility goods had to be of reasonable durability but minimising the use of materials and labour. After realising that new buses were also needed, it worked with the bus manufacturing industry to develop standard designs of motor- and trolleybuses to be produced by a limited number of manufacturers. All Utility trolleybuses had Karrier W4 (Wartime 4-wheel) chassis with electrical equipment from English Electric, Metropolitan Vickers and in 175's case, British Thomson-Houston. 175 has a Park Royal body.

Features of Utility buses are the "single skin" panelling (ie the reverse of external side and roof panels are visible inside the bus); the use of steel external panelling instead of aluminium, the use of cast-iron chassis components in place of steel, restrictions on the number and size of indicator displays and even the numbers of opening windows - only one per side on each deck was permitted. At first, seats were wood-slatted without upholstery although by the time 175 was built the standard was being relaxed and 175 had upholstered seats from new.

The majority of Utility bus bodies were wood-framed and therein lay their main weakness: much of this timber was unseasoned. During the late 1940s and throughout the 1950s most "Utilities" had to be rebuilt, often beyond recognition, or given completely new bodies - sometimes both! - or were even scrapped long before their chassis wore out. 175 is a rare survivor and the Trolleybus Museum is fortunate in having three Utility trolleybuses and one motorbus in largely original condition.

175 is awaiting restoration and kept off-site in the Museum's storage facility.