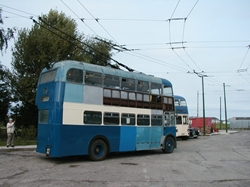 Operation of both trolleybus systems was transferred to the Grimsby Cleethorpes Transport Joint Committee in 1957 and they were closed on 4 June 1960.

This was the first of four similar trolleybuses that entered service with Cleethorpes Corporation in 1950. They had the last trolleybuses bodies to be built by Northern Coachbuilders and the only trolleybuses to have the NCB body design that had been strongly influenced by ECW. Originally carrying fleet number 59, it was renumbered 159 when it transferred to the merged fleet in 1957. All four were sold to Walsall Corporation and the other three were lengthened and fitted with forward entrances; these entered service as Walsall 875 – 877. However, 874 was not rebuilt and it entered Walsall service on 1 February 1962.

In 1969 the Walsall undertaking was transferred to the new West Midlands Passenger Transport Executive. WMPTE was the only PTE to inherit trolleybuses and in view of the age and size of the fleet the decision was taken to replace them with motorbuses - which largely came from Birmingham and many of which were older than the trolleybuses they replaced. Consequently 874 was withdrawn on 28 February 1970 and purchased for preservation. It was used by the then Reading Transport Society for a tour on the last day of operation of trolleybuses in Walsall, 3 October 1970.

This privately owned vehicle is currently kept at the Museum's off-site store at Westgate. It is planned to transfer it to the Museum shortly to re-start its restoration to Grimsby-Cleethorpes condition.