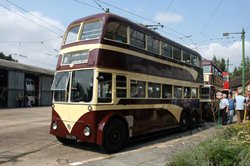 Although the possibility of operating trolleybuses in Cardiff was first considered as early 1911, it was not until 1942, during the Second World War, when Cardiff became the penultimate system to commence trolleybus operations in the United Kingdom after winning the battle over motorbuses to replace the remaining tram routes.

It was decided that the tram route between Llandaff Fields and Clarence Road would be the first to be converted to trolleybus operation and tenders were sought for ten 70 seater (3 axle) vehicles. Leyland Motors originally won the order for the trolleybus chassis whilst the bodywork contract was won by Northern Counties. However, in June 1940 Leyland Motors informed Cardiff Corporation that they would not be able to fulfil their contract for at least several months as they had been instructed by the Government to suspend all civil contracts. AEC were subsequently contracted to supply ten 664T chassis instead.

The ten chassis were delivered to Northern Counties for bodying between August 1941 and June 1942 and five completed vehicles were delivered to Cardiff between October 1941 and March 1942. They were given fleet numbers 201 to 205 and were painted in the regulation wartime grey primer livery rather than Cardiff’s maroon and cream livery. The remaining 5 vehicles were delivered between July 1942 and December 1942. The bodies were built to prewar specification and not to the utility design despite the fact they were built during wartime. They were the only 10 trolleybus bodies ever built by Northern Counties.

The trolleybus system was inaugurated on 1 March 1942 when Route 6A, between Wood Street and Clarence Road commenced operations. A flat fare ‘Pay-as-you-enter’ system costing 1d was introduced although no change was given if more than 1d was placed in the receptacle! 203 retains the hole in the staircase stringer through which the funnel part of the receptacle passed. The next four trolleybuses (206-209) were delivered between July 1942 and October 1942 which enabled the trolleybus service to be extended from Wood Street to Llandaff Fields from 8 November 1942. The last vehicle, 210, was finally delivered in December 1942, and entered service in February 1943.

In 1946 at least four of these vehicles, including 203, were repainted in a streamlined crimson lake and cream livery. Others remained in grey until by 1949/50 all ten vehicles had all been repainted in standard motorbus livery. Somewhere around 1949/50, 203 received its first major overhaul. In the process of this, it lost the purple light positioned to the nearside front of the destination box. In late 1958, it was given something of a light overhaul and repaint, at which time its rear upper deck emergency window was rebuilt to the familiar Cardiff style, with two small windows separated by a wide solid section. The original frame of the emergency window was retained, two extra vertical spars added, and ply board fitted between the spars. Smaller size glass was then fitted, together with a flap assembly that opened out over the glass to allow linesmen to stand on the emergency door to attend the trolley heads etc.

During its last year of service 203 was also used extensively on learner duties, and for this purpose the sliding glass window in the front bulkhead was removed and replaced by a hinged opening window. During their period in service these vehicles were not rebuilt to any great extent and several of them, including 203, retained their distinctive three piece front destination. During 1964, 204 received accident damage to the area around the front destination box and the front upper deck windows. Although the trolleybus fleet was in the process of being run down, 204 was surprisingly repaired with new panels, re-appearing with the glass in both the front destination box and the front upper deck windows being rubber mounted. Its appearance at the front was considerably altered by the extent of the repair.

The RTS had expressed an interest in one of these vehicles and Cardiff Corporation duly presented 203 to the Society. The problem was where to store it. The RTS had already purchased Reading 113 and this was stored at Smiths Coaches garage yard in Basingstoke Road, Reading along with London 260 which belonged to two London members of the RTS, Tony Belton and Fred Ivey. Alfred Smith, owner of the coach company and also RTS President, did not want any more vehicles stored at his depot at that time.

The owners of London 260 were joined by Don Jones, another London RTS member,  and together they set up an associated group called the London Trolleybus Group (LTG) to oversee the future of Cardiff 203. The first thing they did was to find temporary accommodation for 203 in a yard at Chadwell Heath, on the outskirts of London, and subsequently the vehicle was towed there from Cardiff on 19 May 1963. The towing vehicle used was a preserved Southdown Leyland TS7 coach, DUF 179, owned privately by a bus enthusiast.

203 remained at Chadwell Heath until 8 March 1964 by which time Alfred Smith had agreed to the storage of more RTS trolleybuses at his depot. Tony Belton, Secretary of the LTG, had purchased a Dennis Lancet J3 coach, KJH 900, from Smiths Coaches, and it was this vehicle which eventually towed 203 to Reading on 22 March 1964. By this time Bournemouth 212 (now 99), Reading 113 and London 260 were also stored at Smith Coaches depot yard. Soon afterwards the LTG members commenced restoration work on 203 by stripping the paintwork from the offside of the vehicle.

In 1967 the RTS offered to sell 203 to the LTG which by now was known as the London Trolleybus Preservation Society (LTPS) for a nominal sum. This offer was accepted and on 24 March 1967, 203 was towed by KJH 900 to undercover storage at a yard in Charing, Kent. The LTPS had, by now, formed an alliance with the East Anglia Transport Museum with the intention of eventually operating a fleet of trolleybuses at their Carlton Colville site. As a result of this the LTPS moved a number of their trolleybuses to Carlton Colville, 203 being moved there overnight on 14 and 15 September 1968.

Further restoration work was carried out on 203 but by 1981 the pressure for space for storing trolleybuses at Carlton Colville was becoming critical. As a result of this the LTPS offered the RTS (by now the British Trolleybus Society) the chance to take over responsibility for 203 once again, which was accepted. Almost immediately, BTS member David Gledhill expressed an interest in becoming custodian of 203. After paying a nominal sum to purchase her from the BTS he transferred 203 to the premises of the Oxford Bus Museum at Lower Hanborough.

Between 1981 and 1993 David Gledhill had almost completely restored 203 back to original condition, including painting it in the regulation wartime grey primer livery. However, due to personal circumstances David could not continue to look after 203 and consequently it returned to the BTS fleet once again. With Walsall 872 departing from Sandtoft to go to the Aston Manor Road Transport Museum on 21 March 1993, the opportunity was taken to tow Cardiff 203 to Sandtoft where it took 872's depot space. Throughout 1993 David Gledhill and others worked hard to finish off 203's restoration and by June 1994 it was ready to operate at the Black Country Museum during their ‘Trolleybuses Galore’ event.

Following its stay at the Black Country Museum 203 was towed back to Sandtoft. The towing of 203 over the years has seen a few incidents take place and this tow was no exception. On the journey back a rear nearside tyre exploded causing damage to the underside on the vehicle and lifting out part of the rear wing! Repairs were carried out on arrival back at Sandtoft but sadly 203 did not see much service after that as serious problems with its motor began to manifest themselves.

203 remained in the depot until such time as funds could be obtained to carry out repairs and as a result the bodywork began to deteriorate. Following the restoration of South Shields 204 in 2005, Cardiff 203 was Mike Dare’s choice as the next vehicle to be restored when funds permitted.

Sadly Mike passed away in 2005 as had another staunch trolleybus enthusiast in 2003: Geoff Griffiths, a Welshman and author of the Trolleybooks history on Llanelli Trolleybuses. Geoff was also well known at Sandtoft, Black Country Museum and Carlton Colville for all the electrical work he carried out at these museums as well as the Cardiff and South Wales Trolleybus Project team. The BTS committee considered it would be a good idea if Cardiff 203 was restored in memory of both Mike Dare and Geoff Griffiths and an appeal for funds was made.

With enough funds now in place, restoration work was started by Brian Maguire (bodywork) and Bruce Lake (electrical work) in early 2009. It has proved to be quite a costly restoration job as the electric motor had to be sent away to repair a serious defect and also all internal seating has had to be completely re-upholstered. 203 has been repainted into the streamlined livery it wore between 1946 and 1950 and was re-launched into service at Sandtoft on Sunday 30 May 2010 following a ceremony performed by BTS Trustee Lord Stoddart of Swindon.

This vehicle regularly runs at the Museum.