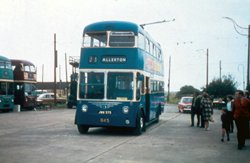 This was the first vehicle of a batch of three, which turned out to be the last trolleybuses delivered to the Mexborough & Swinton company. Originally they carried centre-entrance Brush single-deck bodies. After the M&S system closed in 1961 the three together with another four similar vehicles were sold to Bradford Corporation.

845 re-entered service with its new East Lancs double-deck forward-entrance body on 3 December 1962. As a sign of the times, in 1970 it was one of four trolleybuses equipped with 2-way radios to improve staff security on late evening journeys.

845 was the first trolleybus to operate from overhead wires at Sandtoft. It is awaiting restoration and has been placed on permanent loan to Keighley Bus Museum.