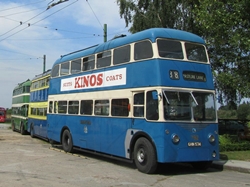 792 began life in 1944 as a Darlington single-decker, where it ran for 13 years before that system closed. Meanwhile, Bradford at that time had a thriving system and an established tradition of buying second-hand vehicles for further service. Older trolleybuses were often rebodied and out of a total of 24 purchased from Darlington, nine entered service in 1958 refitted with very modern forward-entrance bodies from East Lancashire Coachbuilders. 792 became the first of these to enter service and their platform doors were especially welcomed, setting the pattern for a further 39 rebodied trolleybuses during the next five years. With the added weight of double-deck bodies, the original 80hp motors of the 785-793 batch did not perform well on Bradford’s hilly routes, and in 1965 no.792 received a 95hp replacement from one of Hull’s “Coronation” trolleybuses.

792 ran in Bradford for over 12 years and, after withdrawal in 1971, it became the only one of its type to be secured for preservation. After a year of storage near Skipton, 792 joined the growing collection at Sandtoft, where it ran on various open days over the next seven years. Following a very long period of inactivity, a concerted effort on repairs and restoration work finally saw a newly-repainted 792 back in service in October 1996. Since then, it has been a regular "workhorse”, having operated in passenger service during most of the past 24 years, and participated in trolleybus rallies at the Black Country Museum. Now, despite still being mechanically and electrically sound, 792’s bodywork is showing its age once again and another restoration project is well overdue.

This vehicle is in regular service at the Museum.