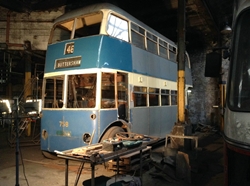 On behalf of its members the B.T.A. co-ordinated the purchase of all the remaining trolleybuses bar one that ran in Bradford on 26 March 1972, with the aim of eventually restoring them to operate under the wires at Sandtoft.

Whilst its members did own a variety of ex-Bradford trolleybuses, the B.T.A. now owns just one vehicle – 758. 758 is a B.U.T. 9611T with 8ft wide Weymann body. It was registered FKU 758 on 1 January 1951. Originally ordered for the conversion of the Undercliffe trams, the plan was changed and the service converted to motorbuses but the order for these 8 trolleybuses could not be cancelled. Instead they were used to start the expansion of the system under its new General Manager, CT Humpidge.

On 1 July 1971 758 became the last rear-entrance trolleybus in service in Great Britain but was withdrawn on the last day of that month. She is now undergoing a thorough restoration to restore her to her former glory at the Keighley Bus Museum and the Association is currently gathering the finances to meet the costs involved.