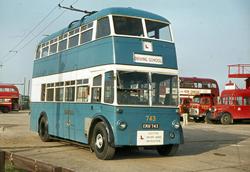 743 was one of a batch of 12 Weymann bodied AEC trolleybuses ordered in September 1946 for the conversion of the Bradford Moor tramway, with a further 8 similar vehicles being ordered the following February. These 20 vehicles turned out to be the last completely new trolleybuses purchased by Bradford Corporation, none being rebodied and all subsequent purchases were secondhand.

The 1946 order was much delayed and to speed delivery Weymann were allowed to sub-let the bodywork contract for the first twelve to CH Roe of Leeds, which at that time was not one of the Corporation's usual suppliers. However the delay allowed them to built to the newly-permitted 8 foot width, whilst AEC had formed a joint enterprise with Leyland: British United Traction (BUT). Delivery eventually took place between December 1948 and February 1949.

The Roe-bodied batch was placed in store and not licenced until December when they took up service on the Bradford Moor service, which a month later was linked across the city centre to the existing Crossflatts via Bingley and Saltaire trolleybus route. Having a high rated motor in a 2-axle bus gave these vehicles impressive acceleration and they easily coped with the steep (1 in 9.5) climb past Bradford Cathedral: few 3-axle trolleys at the time had such large motors.

By late 1952 all 20 were allocated to Saltaire Depot - on the line of the combined route - thus becoming known as the "Saltaire BUTs". 743 spent most of its remaining operational life there, only being transferred to Thornbury Depot when the Crossflatts - Bradford section was being prepared for conversion to motor buses.

Withdrawn from passenger service in February 1964, 743 was again placed in store to re-emerge in December 1966 as driver training vehicle 062. It was finally withdrawn on the last day of 1970, after which it was delicenced and sold for preservation.

This vehicle is kept at one of the Museum's reserve stores awaiting the completion of its restoration.

It is a sister vehicle to Bradford 746 which runs regularly in service on open weekends.