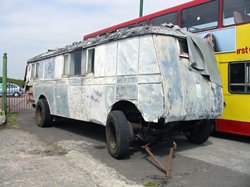 562 was part of a second batch of single deck trolleybuses ordered by Bradford Corporation from the English Electric Company who had a large factory in the city: Phoenix Works, at Thornbury. The chassis was a modified version of the Leyland Lion PLSC1, which allowed commonality of spare parts with Bradford's motorbus fleet. Unusually the EE Type A had a three-pedal layout: power, rheostatic brake (which used the traction motor as a dynamo) and a mechanical brake.

562 seems to have led a fairly uneventful life being withdrawn from service on 27th January 1945. Its initial disposal was to the well-known dealership of W North in Leeds, being sold on to become a caravan at Eastoft, not far from Sandtoft, where it remained until 1989. Put in store at Elland it was eventually moved to Sandtoft in 2001.

It is a remarkable survivor of an early British trolleybus; it is believed that 93 English Electric trolleybuses were built during the period between July 1928 and August 1931, of which Bradford bought 53. Some restoration work has been done and it no longer looks like the picture shown on this page!

This vehicle can be viewed at the Museum if accompanied by a member of the Museum staff.