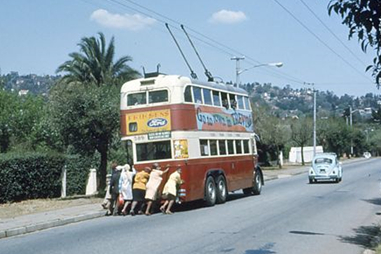 The long, long job to restore our Johannesburg trolleybus no.589 back to its former glory is progressing to a new and exciting phase. The chassis and mechanical components have been overhauled, many of its electrical units have been refurbished, the all-metal body structure that had seriously corroded away over the years has been a complex task requiring meticulous attention to authentically re-build it and now work has turned to the fitting out process incorporating scrupulous detail to “get it right”. We estimate that no.589’s restoration is now around 80% complete.

All this work – and repatriating no.589 from South Africa in the first place – has been paid for entirely through kind donations from enthusiasts (many of whom are not TM@S members) and from businesses. In fact, incoming money to date (including associated Gift Aid tax reclaims and bank interest) is teetering on £300,000 - a staggering figure unequalled, we think, anywhere in trolleybus preservation.

What is so special about this trolleybus? Primarily, it is the only preserved representative in this country of the hundreds of double deck trolleybuses that were UK-designed and exported: as such, it tells that part of the story of the British trolleybus – a product of sound British engineering. But no.589 has other attributes. It spent over 26 years in service; it is one of the first BUT trolleybuses to be built (early 1948); its handsome MCCW body was provided in kit form and assembled in Port Elizabeth by MCCW subsidiary, Bus Bodies (South Africa) Ltd. It was one of the replacements for Johannesburg’s pre-war AEC trolleybus order that was frustrated by WW2 and diverted to London Transport to become their SA3 class; no.589 is virtually identical to the SA3s.

Although work has been able to continue on no.589 throughout 2020, our fundraising has been badly hit by the Covid-19 pandemic so hasn’t kept pace as planned with the work. We know so well that money is tight for many because of the lockdowns, and most businesses, however sympathetic, have been badly affected and aren’t able to give money to charities at present. With getting no.589 finished now clearly in sight, we don’t want to stop the good work so please, GIVE US A PUSH and make a donation to help 589 on its way.

Whatever you can afford will be gladly welcomed and acknowledged.

The October 1973 photograph, taken by Tony Belton on a Thursday afternoon (when nannies had an afternoon off) is of, of all trolleybuses, no.589 heading for central Johannesburg during a power supply interruption in a section of overhead: clearly, nothing stops nannies having their time off!