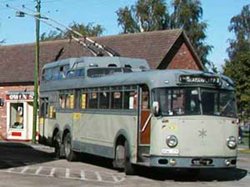 Aachen 22 has a Henschel 562E chassis, a Ludewig one-and-half-deck body and Siemens electrical equipment, as did nine similar vehicles for Osnabruck. There had only ever been twelve built new, all in 1956, the other two for Wuppertal having Krupp chassis. Additionally, 16 older chassis were rebodied as one-and-half-deckers, making a total of 28.

Aachen had a single trolleybus route of 20 kilometres which operated from 1944 until 1974. By the time number 22 was withdrawn on 10 October 1972 it was the only one-and-a-half deck trolleybus in service anywhere.

The project to preserve this vehicle followed a discussion between Dave Chick and the late Gert Aberson in 1972. Several more typical German trolleybuses had already been preserved and the unusual 22 would be an exotic addition to the preserved fleet at Sandtoft.

Gert corresponded with the operator, which offered to donate the vehicle to the British Trolleybus Society. Upon arrival in this country, 22 was accommodated in the Great Yarmouth Corporation bus depot before transferring to Carlton Colville for a few more weeks until a towing vehicle was available for the final move to Sandtoft, where the vehicle remains.

22 is now funded by a group of BTS members through the Society’s Sponsortrolley scheme.

It now needs major restoration work to be carried out before it can return to public service at Sandtoft.

Not normally on view at the Museum. Please contact the Museum before making a special visit to view Aachen 22.