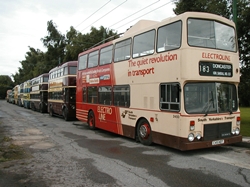 This important vehicle was the first trolleybus built for a UK operator since 1962. Unfortunately it only saw experimental use and has remained unique.

The last British trolleybus had run in Bradford in 1972 but following the fuel crises of the mid-1970s the wisdom of abandoning electric street traction in the UK was already being questioned. In 1984, the South Yorkshire Passenger Transport Executive (SYPTE) formed a consortium with Hestair Dennis, GEC Traction and Alexanders to build an experimental trolleybus, in connection with plans to reintroduce trolleybuses on four bus routes in Doncaster and two in Rotherham.

The Alexander RH-bodied Dennis Dominator was the SYPTE standard bus of the early 1980s and the experimental trolleybus is a minimally-adapted version of the type; it received the fleet number 2450 at the end of a batch of its diesel-powered brethren. Unusually for a British trolleybus, it has an auxiliary air-cooled diesel engine (a 48 hp 3DA Dorman) for moving away from overhead wires. It has a GEC traction motor and is capable of running at 40 miles per hour (64 km/h).

A test circuit of overhead wiring was erected by Balfour Beatty on land adjacent to Doncaster Racecourse, which is situated across the road from the PTE's (now First Group) depot at Leicester Avenue. This went from a turning circle at the end of the (private) Sandall Beat Road and crossed Leger Way into the depot where there was a substation supplying power to the overhead at 600 volts dc.

It is known that 2450 was used on at least one occasion in revenue-earning service, during an Open Day at Leicester Avenue Depot on Sunday 8th September 1985 when fares were collected on board. The vehicle is reported to have proved satisfactory in operation.

The 1985 Transport Act de-regulated bus services in mainland Britain outside London from October 1986. This meant that any trolleybus route would have no protection from competing operators. Subsequent amendments to the legislation in this century now give the necessary protection to this sort of "fixed track" bus operation but this came far too late for the Doncaster project which was shelved in 1986. The wiring remained in place for some years and was removed in September 1993.

After the project ended, 2450 was placed on loan to the Trolleybus Museum at Sandtoft. An enquiry by the Museum about buying the bus from SYPTE some years later caused confusion: it appears by that time the PTE had forgotten all about it!

2450 developed a fault with its electronic control system some years ago. Without technical drawings and because of its experimental nature this has proved difficult to trace and repair but much progress has been made recently by our volunteer experts.